When my sons were 3 and 4, we moved to Apple Valley. It was a very hard move for the boys, and soon after, my youngest son, Vinny, developed a very bad stutter. Sometimes, he stuttered so badly that I couldn’t understand what he was trying to say. Sometimes, Tony would have to interpret for me. I don’t know how Tony could understand his brother, but he could, and he would let me know what Vinny was trying to say. Sometimes, especially if Tony wasn’t around to interpret, Vinny would get so frustrated with his stuttering that he’d dissolve into tears and stop trying. It wasn’t that I wasn’t listening to him, it was just that I couldn’t understand what he was saying to me.  Vinny would cry and retreat to his room and clean it, he’d put everything in perfect order in his closet and on his shelves. Gary and I knew that since he couldn’t control how words came from his lips, he wanted to control something, anything, so he put other areas of his little life in perfect, controlled order.

One day, after I put the boys down for their naps, I began to weep with frustration over not being able to help Vinny. I had tried everything, including speech therapy and oral desensitization, but that little guy still could not stop stuttering, and spent much of his time silently cleaning and ordering his room. Gary and I were beside ourselves with worry and a deep sadness.

On that particular day, Vinny was exhausted from trying to tell me something. He started crying in frustration, and was now sleeping soundly. Desperate for help and support, I went next door to my friend’s house. I poured my broken heart out to her, and she said, “Have you prayed?” I said “Of course I’ve prayed, Gary and I have been praying about this for months!” She said “I know you’re ‘praying’, but have you really prayed? Have you been talking to God the way you are talking to me? Have you poured your heart out to Him and asked Him to help your son?” I thought about it and realized that, no, I hadn’t.

How many times do we say “I’m praying about this or that” or “I’m praying for you!” to someone, but really, we just have positive or sympathetic thoughts for them, or about their situation.  Then when we wonder why God didn’t answer our prayer, He wonders, “What prayer?”

I love to pray. That’s not to say I’m good at it or do it enough. It’s a discipline; it has to be something we decide to do, then do it. I often fall asleep praying, and I used to think that was terrible. Then I remembered that God is my Father, and He loves it when I fall asleep in His arms, and that’s OK. I certainly would not be offended if my child fell asleep in my arms while telling me about his joys and sorrows! 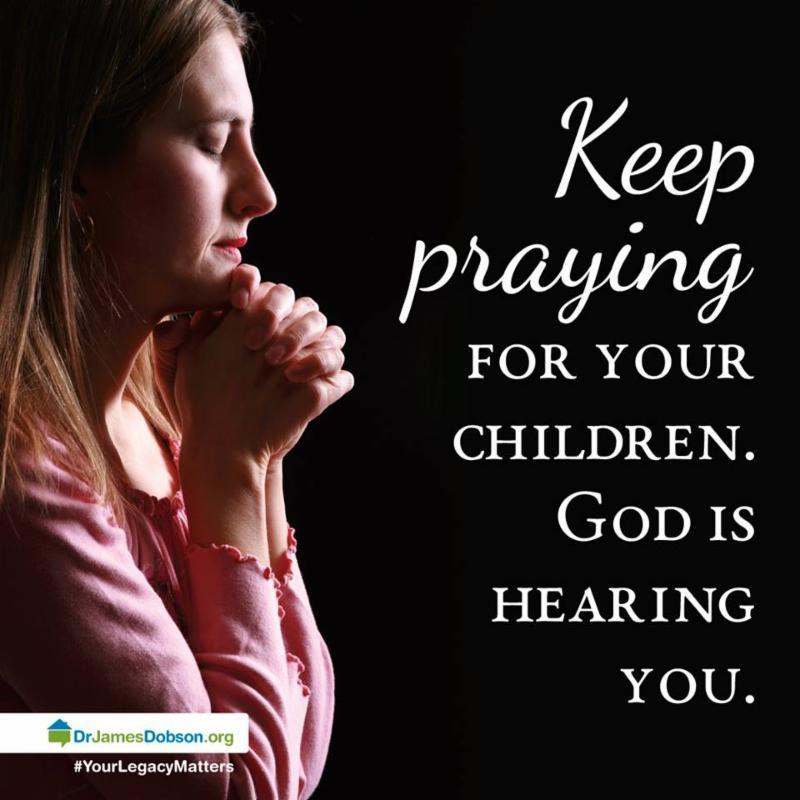 When I realized that I had not actually really prayed about Vinny’s stuttering problem, I was so surprised! I thought I had been praying for months! What I had been doing, though, was thinking, emoting, sharing my feelings, wringing my hands, and saying that I was praying. I would venture to say that most of my friends and family were doing the same, sincerely worrying about Vinny, and sincerely offering me their love and compassion and promises to pray. But did it end there? Too often, I think it does end there.

Not long ago, I was discouraged to the point of not wanting to share my prayer requests with my friends and family because I felt it went nowhere. It began with me sharing my heartfelt concern, followed by a heartfelt response and promise to pray, and then, sadly, that was the end.

Back at my neighbors, I confessed that I had not been praying as I should.  I had been complaining, and worrying and carrying the burden of this problem without ever really seeking help from God! I’d been running around saying “Oh my burden’s so heavy, it’s so heavy, I can’t take it! My poor aching back carrying this heavy weight!” I was announcing to the world my heartfelt concern, but never actually took it to the Throne! I just talked about it!

I thanked my friend and told her that I needed to leave. It was time for me to pray, to make an appointment at the feet of Jesus and seek His help. That’s exactly what I did. I went home and checked on the boys, and they were still sleeping soundly. I got on my knees in my bedroom and I prayed like I had never prayed before!

God met me there, and I felt His presence, I felt Him wrap His arms around me and say “I’ve been wondering when you were going to talk to me about this! It blesses me when you trust me with your concerns! What concerns you, concerns me. What breaks your heart, breaks mine. What brings you joy, brings me joy! You underestimate my great love for you, and for Vinny.”

After that wonderful time with Jesus, I called Gary and told him what had happened, I told him about the terrible morning Vinny had and how he cried himself to sleep. I told him how I went next door and faced the truth of my “faux faith”, and how I thought I’d been praying, but in reality I’d only been thinking and worrying and wringing my hands. I told him how I came home and prayed for Vinny.

On the other end of the phone, I could hear Gary was emotional, and struggling to speak, he cleared his throat and said “I was sitting at my desk wringing my hands and worrying about Vinny this morning when God very clearly spoke to me and said “Why are you carrying this alone? Why have you not asked Me to help? Don’t you know I love Vinny even more than you do? Why are you leaving Me out of this? Ask Me.”

Gary locked his office door and got on his knees and starting praying to God at precisely the same moment that I was on my knees praying! Here we were, two broken-hearted parents in two different cities, on our knees separately together enjoying the full attention of the Maker of the Universe on behalf of our sleeping son.

I felt like I was floating around the kitchen as I baked cookies in preparation of Tony and Vinny waking up from their nap. A few minutes later, the dogs trotted through the kitchen – this meant their boys couldn’t be far behind them. Sure enough, there came Tony and Vinny, smiling and rubbing their sleepy eyes, each trying to be the first one to get a hug and a cookie from me. They sat at the counter with their milk and warm cookies, and my sweet Vinny looked at me, and without even a hint of a stutter, said “Mom, I had the best dream ever!”

I marveled as he, stutter free, told me his dream. He dreamed of jumping on the trampoline all the way up to heaven and there were angels and angel dogs and he was soaring through the clouds with them! Then mid story, he realized he wasn’t stuttering! He stopped telling me about his dream, and looked at me with his big blue surprised eyes open wide and said “Hear me? Hear me?”

So my friends, don’t just talk about praying, don’t just tell your friends and family that you will be praying for them.

I'm a daughter, sister, wife, aunt, mom, mom-in-law, and Mimi! More than that, I'm a sinner saved by grace. Sometimes life opens up and reveals lessons that I love to share! My hope is that you will enjoy some of the life experiences that I will be writing in this blog and be blessed by them. I love to share what God puts on my heart! View all posts by beyond-all-measure